With the double-exhibition ‘CIT.CIT 1’ at the Jan Mot Gallery and ‘CIT.CIT 2’ at Etablissement d’en face Projects, Richard Venlet (°1964, Hamilton, Australia, lives in Brussels) not only refers to the work of other artists through this particular presentation, but also to his own oeuvre. Since the beginning of his practice in the 1990’s, the establishing of partition elements, the construction of open and closed volumes, white, grey or black painted surfaces, the instigation of borders and the filling in of spaces have all been aspects of his repertoire. These site-specific interventions with their Spartan minimalist visual language are often subtle in dialogue with the existing environment. The projection surface – the place of potential presence but not necessarily visual– fulfils in this as the central role. While Venlet’s earlier works had a rather introverted and hermetical character, the more recent works are more open, playful and activated.

The first intensified works in his overview catalogue ’00’* which was presented in conjunction with his participation in the Biennial in Sao Paulo in 2002, lays the basis for the recent and increasingly complex becoming interpretations. In this he still defines his work as a projection surface and as a potential place from the work itself. For example, with the context of the exhibition series ‘Box’ (Palais des Beaux Arts, Brussels, 1995) Venlet realised an exhibition module in the area of an empty shop located nearby. This was a space within a space with one large opening in the front glass façade. On the one hand it was a horizontal projection surface in the form of a stage, while on the other hand it was an accessible volume that could also be activated and filled in by third parties. It is with this that he lays down the basis for many of his later works: where the facilitative can be used.

Aside from the projection surface and the facilitative, a third theme emerged in the 1990’s as well: the archiving. It was in 2002 with his exhibition at the Biennial of Sao Paulo that Richard Venlet granted the archive of his own frame of references a more pronounced status. A mobile room, bedecked on the outside with mirrored walls, and with the proportions of Venlet’s own small workspace, functioned as an exhibition platform. Painted on the inside in a neutral white colour with a grey-carpeted floor, he placed a set of 35 cardboard boxes with an unlimited number of photocopies. Located above this and to the side of short contemplative texts by four authors (Anonymous H.D., Wouter Davidts, Moritz Küng, Hans Theys) referential imagery was shown (a door in the house of Wittgenstein, an annex chamber from the tomb of Tutankhamen, a 1:1 scale model of Mies van der Rohe), details of his own work as well as works of other artists (cardboard model from ‘étant données’ by Marcel Duchamp, ‘Flash’ by Jöelle Tuerlinckx, a painting by René Daniels etc.). It was a relative nonchalant and unpretentious use of the space, whose artistic concept was intended to be an ‘area for on-going presentations’. In the following exhibition ‘Paramount Basics’ (MuHKA, Antwerp, 2002) a dozen curators were invited to present a series of weekly exhibitions within this volume, from which the filing in was no longer in the hands of Richard Venlet. Today this room is a part of the ‘Curating the Library’ project (deSingel, Antwerp, since 2003) and serves as the location for an ever-growing library.

The so-called angles of the projection surface, the platform and archive found in the project ‘CIT.CIT. 1’ and ‘CIT.CIT 2’ have a parallel existence. The two installations define an abstract index of information. This is comparable to the short story by the British author J.G. Ballard (‘Index’, 1977), that states an existence based strictly upon a alphabetical term register comprised with the most divergent historical personalities and events while allowing the reader to make a reconstruction of an alleged world complot where the protagonist stands in the centre. Also the ‘Lexikon der Kunst 1992’ by artist Heimo Zobernig serves as a comparison. In that Lexicon the personal biography of the artist is linked to persons, locations and places or beliefs that are inter-connected. ‘CIT.CIT. 1’ and ‘CIT.CIT. 2′ thereby bring references to each other and become the location of the quote self: the place as quote, respectively the quote as a place.

CIT.CIT.1 IMAGE BANK at the Jan Mot Gallery takes the form of a monumental décor, laid in grey carpet, where a small room the size of a passport photo booth is integrated. During the entire period of the exhibition, a different film will be presented each week on a monitor inside the booth. CIT.CIT.2 in Etablissement d’en face Projects consists of a raised floor (PLATFORM) on the ground floor that shall
serve as a stage and display for diverse readings, film projections and presentations by artists, architects and theorists such as: Tacita Dean, Magritte Duras, Dominique Gonzalez-Foerster, Juliaan Lampens, Bart Verschaffel, Rudy Vrooman… The stage is comprised of a sheet that provides access to a lower laid room (TREASURY). In this space, covered in grey carpet as well, a selection of paintings, photographs, prints and books by, among others, Richard Artschwager, Marcel Broodthaers, René Daniels, Jef Geys, Ann-Veronica Janssens and Piranesi will be displayed.

With these two exhibitions Richard Venlet constructs a complex and associative frame of reference that refers to both the part of the whole, the whole part and the divisible whole (der Teil und das Ganze / der ganzheitliche Teil / das teilbare Ganze) and where the exhibition space, the works and the viewer are an integral component. 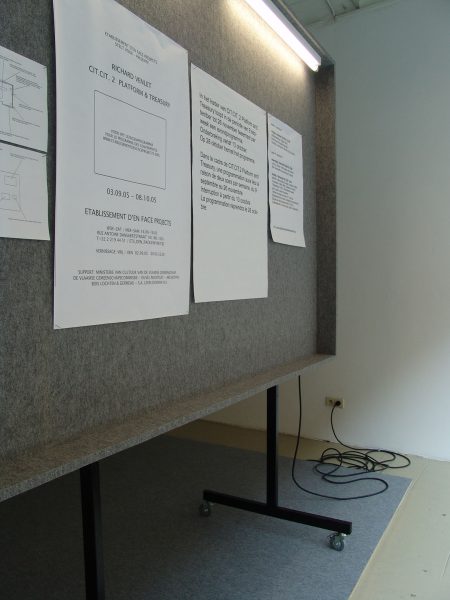 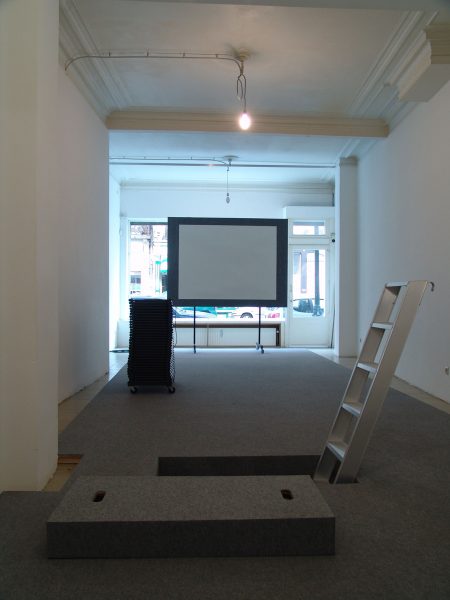 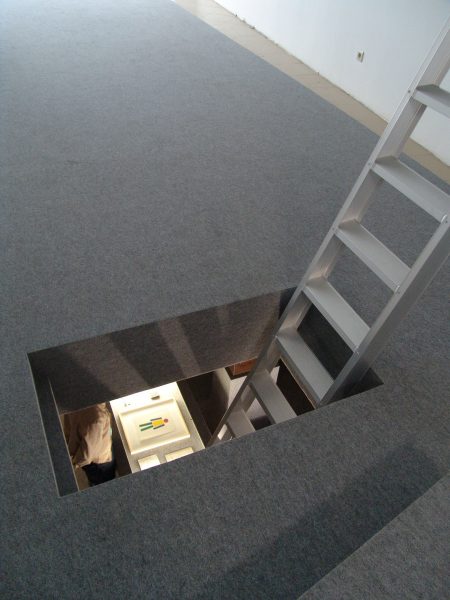 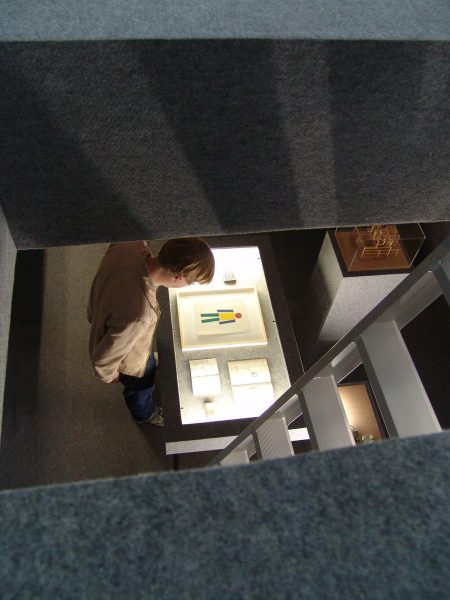 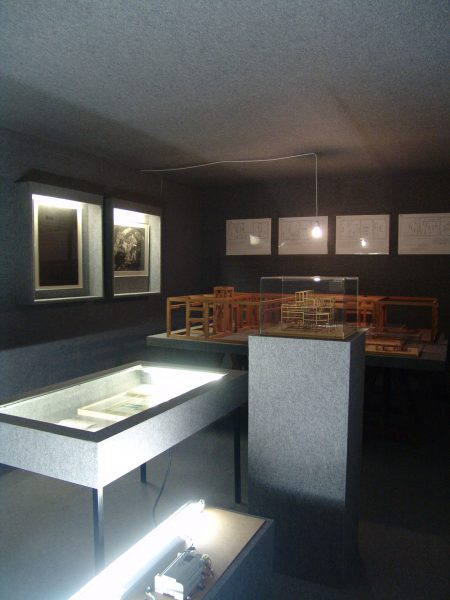 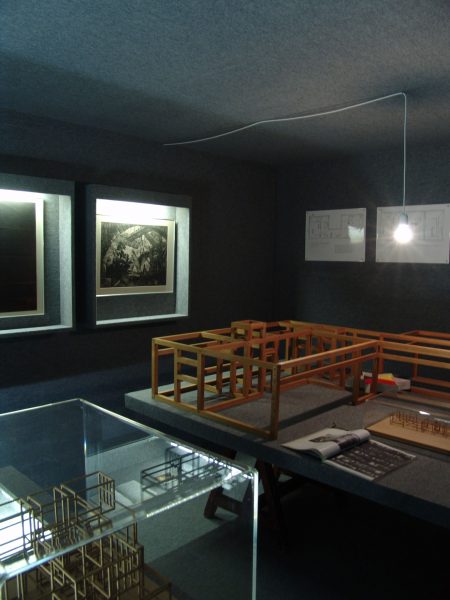 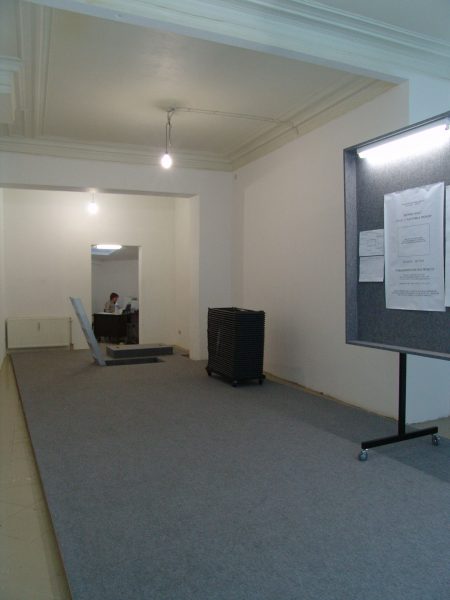