A scopic gaze searches all too quickly for what is absent, leading to a psychological reading, which in this case seems rather unnecessary. Mitja Tušek’s forests – or landscapes to situate them a bit more at large – don’t have an absent subject and, presumably, they don’t even have a motif – they are full and present. If you don’t search, you see everything. Once inside the wood, you can look whichever way you want, it always works out. With nature you’re never wrong. It’s this almost un-conscientious pleasure that is translated generically in the production of these paintings.

Although abstract figuration is a frequently applied method in Tušek’s painting, the landscapes that are presented here are by far the most generic part of Tušek’s oeuvre. Generally he only shows few of them, and only in a contrasting juxtaposition with other types of work. The absence of this juxtaposition (which probably has a dynamical effect in other exhibitions) in the case of Great Balls of Fire is precisely what makes the slightly nihilistic and generic character of the pieces prevail. Their collective hanging reminds somehow of an entomologic display of butterflies – specimens.

All of the paintings shown at Etablissement d’en face were realised between 1990 and the present. Every painting came about over a fairly long period, up to sixteen years. They’re worked on, there’s painting added, they’re put aside and after a while there’s some more painting added. Each painting is an occasional and dispersed addition. They are paintings where the self-evident linear development – from back to front -becomes particularly visible, providing them with a dry humoristic character.

The process seems almost mechanical in a casual kind of way – it takes its course and conceptual detachment fades into esthetical ennui (the arbitrary allocation of the titles probably comes about in the same way). This process assumes, with a sense of self-evidence, that a good idea is hard to bungle. They (the paintings) all share the same general direction that prevails over focus and, independent of certain stylistic differences, they are all equally good or bad.

19th century Romantics were looking at nature in search of that what makes it so much bigger than it is. The romance of Tušek’s forests lies in the exact opposite – If you don’t search, you see everything. 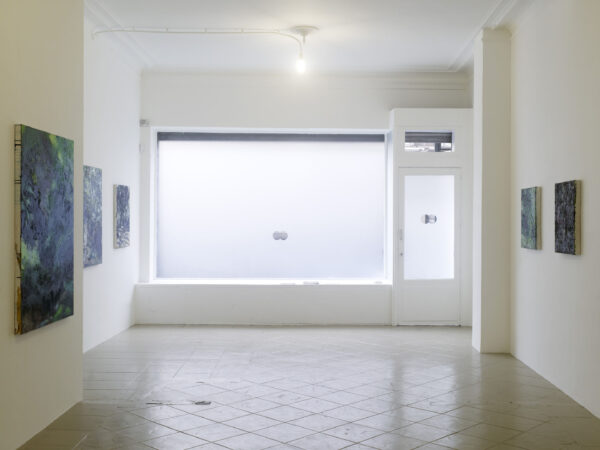 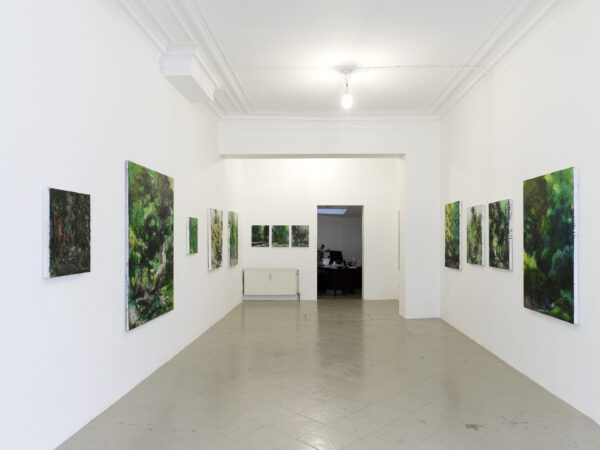 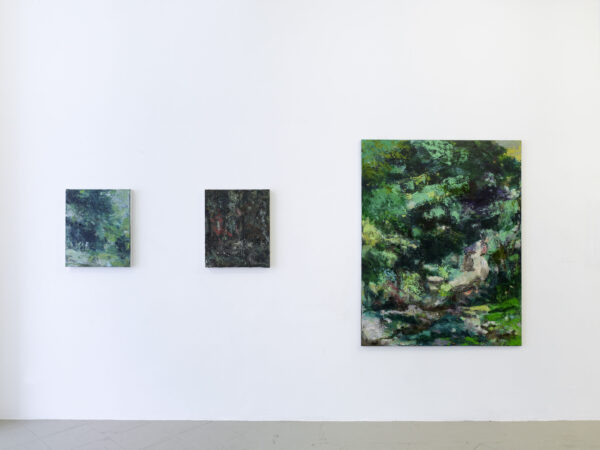 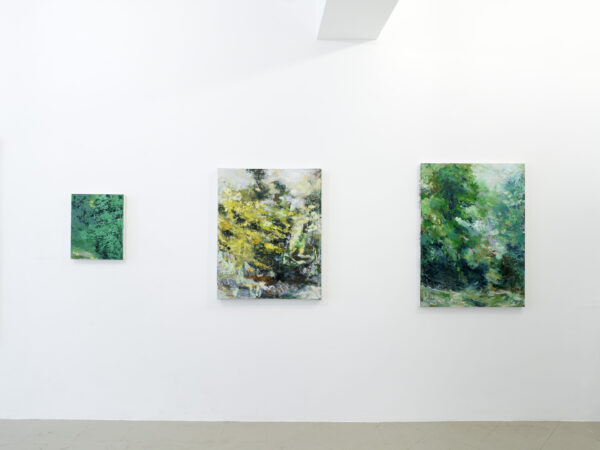 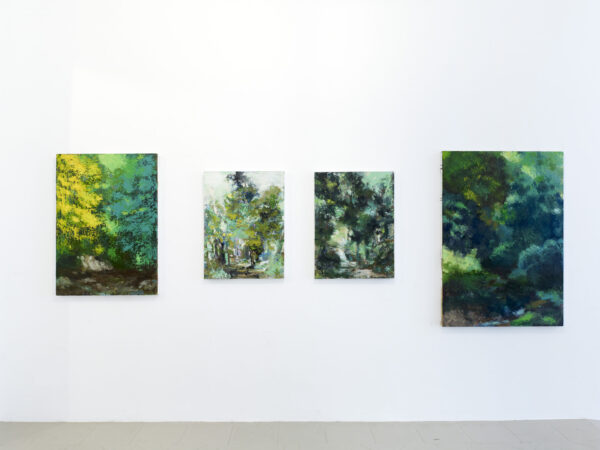 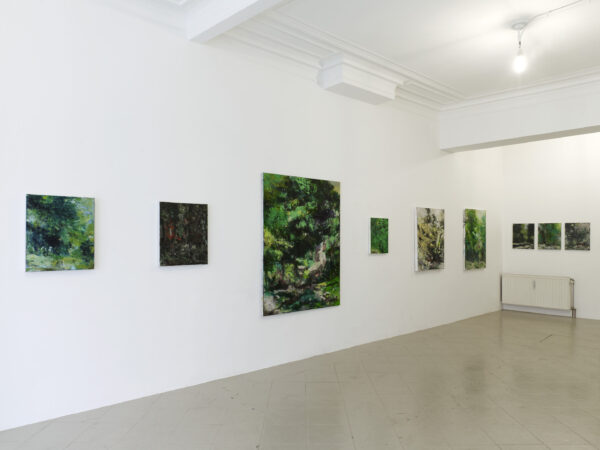 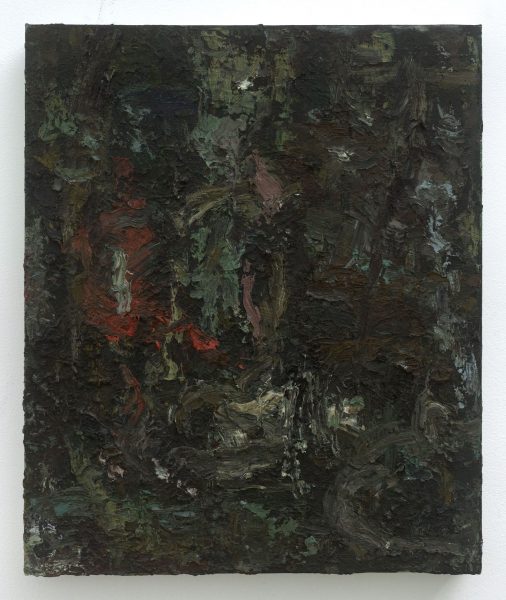 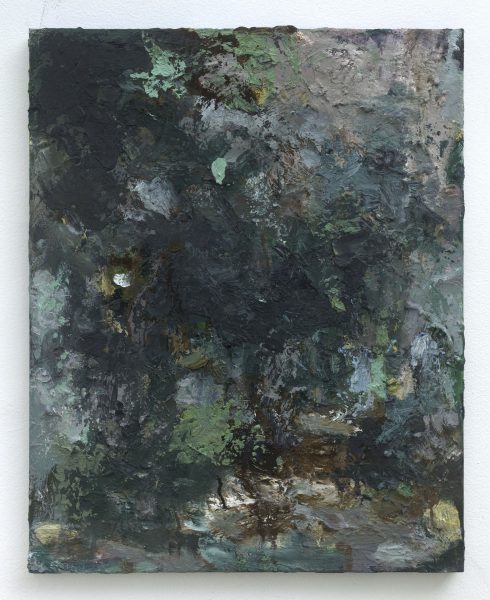 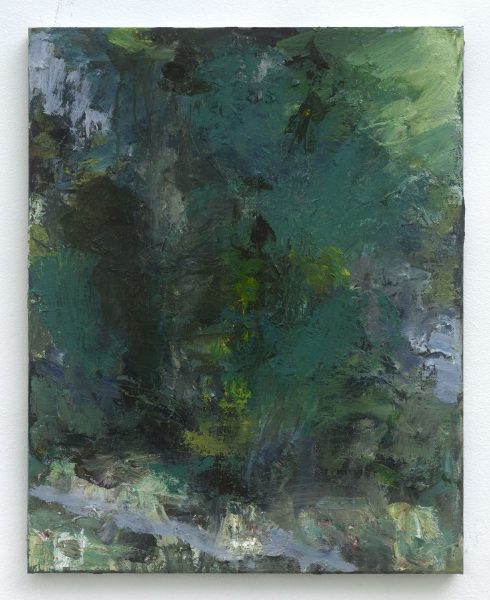 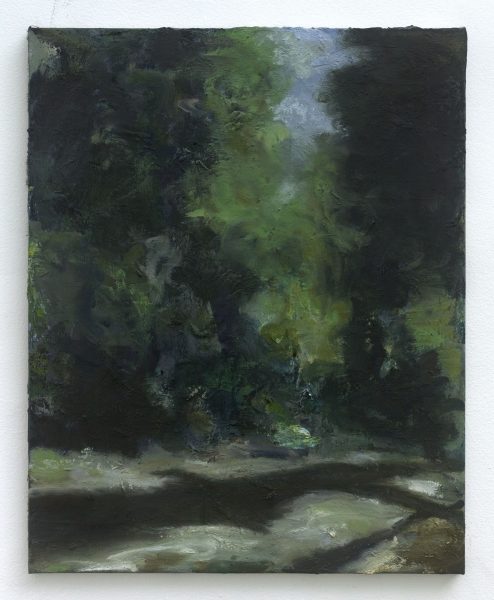 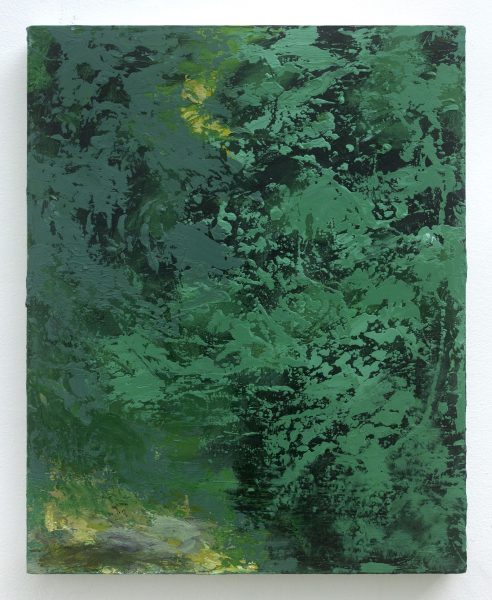 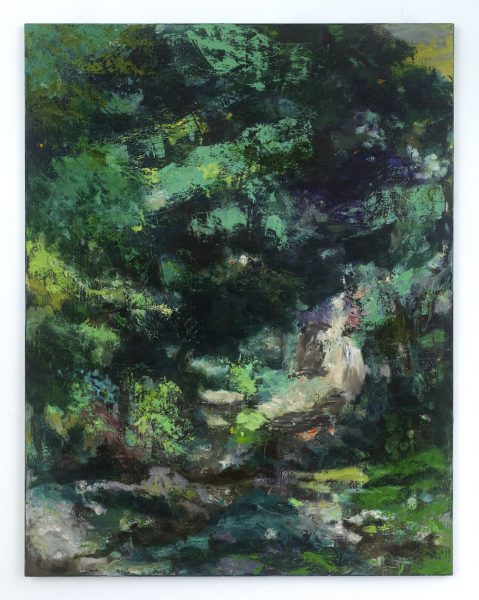 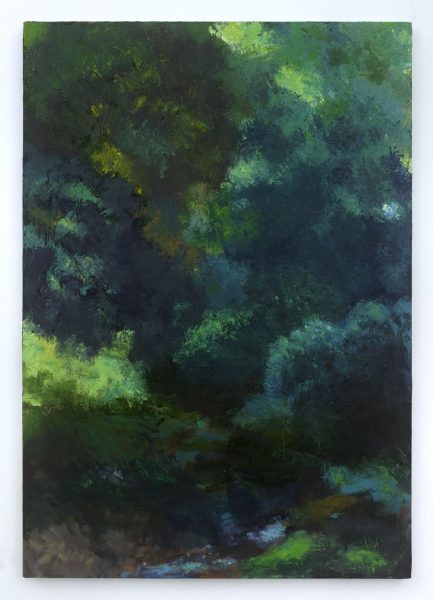 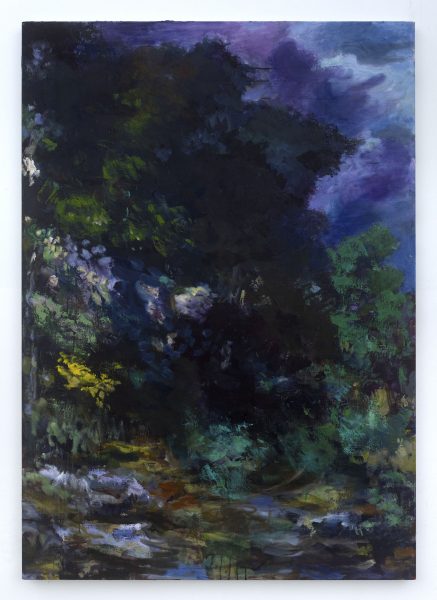 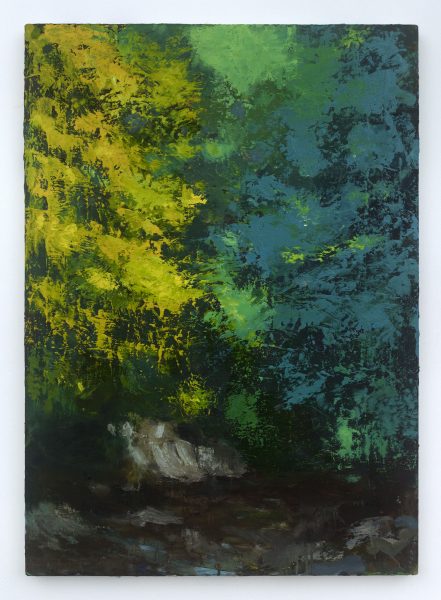 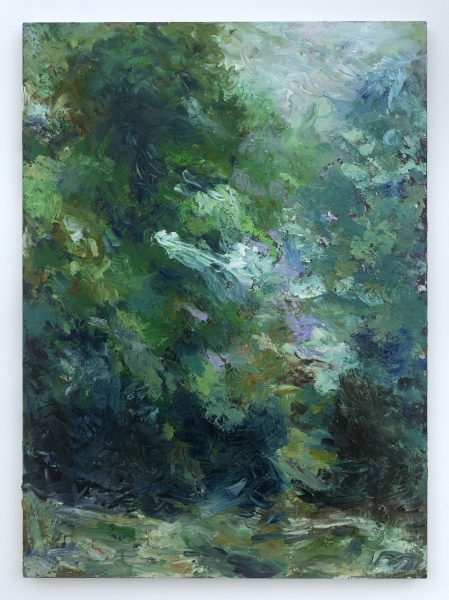 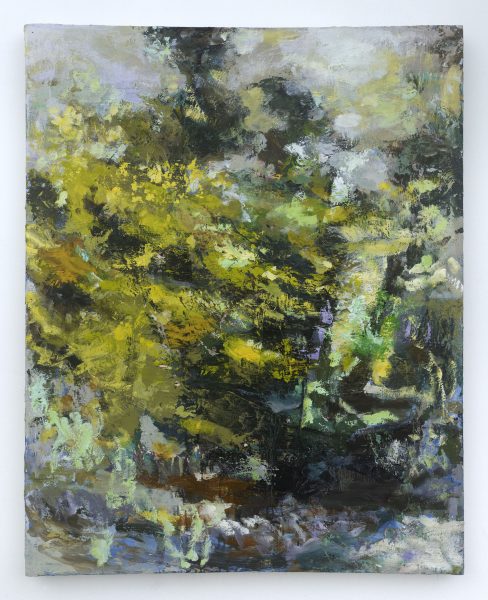 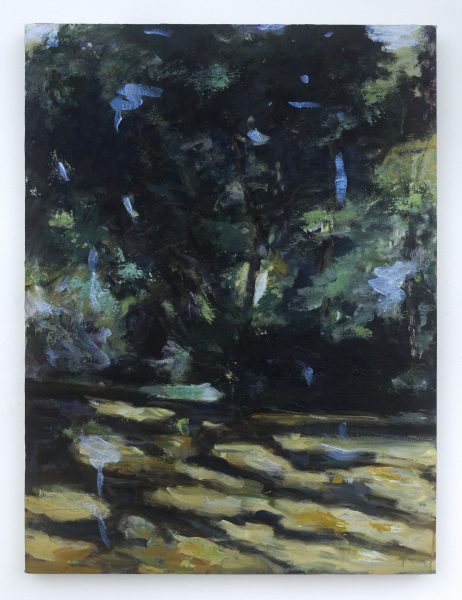 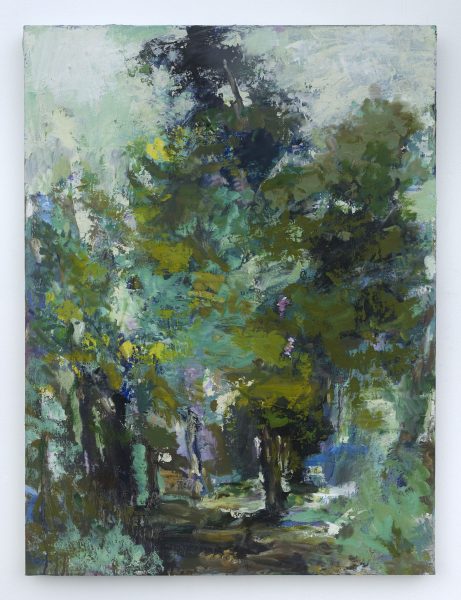 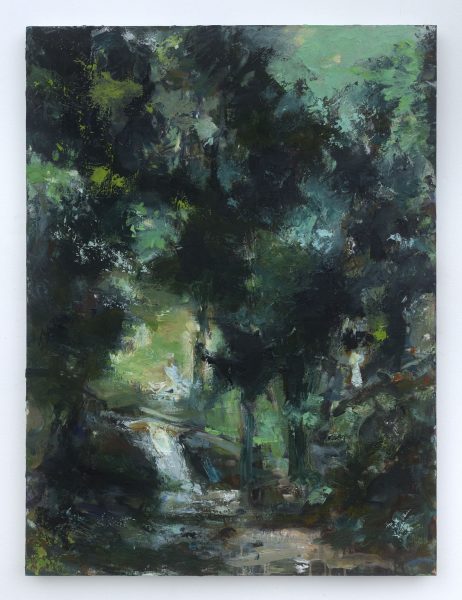