There is the case of a village barber: all the men of his village shave and he shaves those and only those who do not shave themselves. But does the barber shave himself?

Bertrand Russell first proposed this simple story to illustrate the paradox he discovered while unearthing fundamental problems at the core of mathematics more than 100 years ago.

This project explores these universal themes through its engagement with a specific history. Using the medium of film a series of inter-related histories are recounted, the stories originate from Panama during the complex period after the Torrijos-Carter Treaties. The treaties themselves, signed in 1977, were agreements to begin the hand back of the Canal Zone to Panama. They were fuelled by the ambitions of General Omar Torrijos, the country’s then military leader.

The specific history is both tautological and highly improbable. It takes place on Contadora, a tiny south sea island close to Panama City. A list of those present in 1979 includes, the deposed Shah of Iran and his family, Manuel Antonio Noriega and Patricia Hearst. To briefly explain; Torrijos gave the former Iranian royal family asylum (a deal he considered intrinsically linked to the hand back of the Canal Zone), Noriega was placed in charge of the Shah’s security, Patty Hearst happened to be honeymooning on Contadora at the time (her new husband was formerly her bodyguard).

The project proposes probability as an alternate way to consider narrative. In this case fate perhaps would seem more persuasive. Of particular interest was the role of the narrator and, by implication, the role of the artist. The film is narrated in third person and so for the viewer, defining the narrator presents a paradox.

The film draws closely on the personal narrative of sergeant José Jesús Martínez, a close friend and aid to Torrijos. In one of his official capacities (Chuchú) Martínez was the General’s bodyguard. He was also a professor of philosophy and mathematics (the title of this film is therefore derived from one of his texts).

The viewer witnesses a series of 11 takes, alternating between b&w and colour footage. The b&w material is a projected filmstrip version of a text on probability while the colour is of playing cards being sorted and played (cards being a common motif in probability exercises). The narrative is read via voice over.

Bertrand Russell’s original story applied to Set Theory and in conclusion he determined that the Universal Set must also contain itself. Applying the story to this project, ie. listing all the characters in the film: would this list also include the narrator? This paradoxical relationship in turn becomes a reflection on the nature of the bodyguard, a profession that implies both presence and absence. 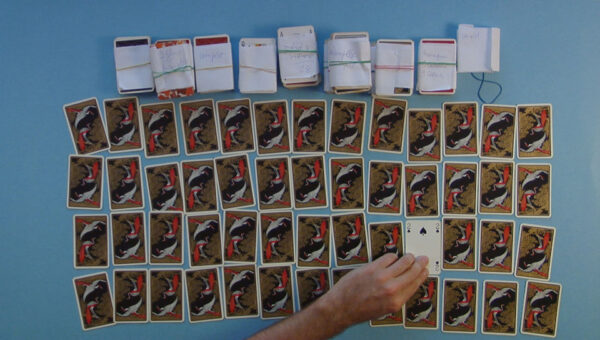