In terms of character, the work of Jürgen Ots is determined for the most part by a sublimated destructive handling of the material. These materials, preferably plastic-like, are cut, torn and glued back together, stapled or melted. In other words, an annihilation that is subsequently restored. The material, and the way in which it is worked or modified, never looks refined. It always seems like muck, shapeless, but above all, digested. And yet the idea behind the treatment is sensitive and precise.

Each of the works appears to be a segment of an indefinite accumulation, and despite this constant addition there is never a build-up of tension. No beginning or end; only a compulsive repetition. As if a single thrust of movement was isolated and then copied numerous times. Take as an example the kind of dream sequence in which one finds oneself in an ever-narrower tunnel; one never experiences the moment one enters the tunnel in question, and in the same way one never experiences the ‘end’ of the tunnel or its narrowing. The scene just stops.

In many respects, Jürgen Ots shares the same technical methodology as the French Supports/Surfaces movement dating from the late 1960s. The Supports/Surfaces movement was truly characterised by a kind of striving for material essence and absence of expression or subject; such technical and formal morality is completely absent in the work of Jürgen Ots. The frenetic and at times neurotic working process – and its psychological dimension, to which the title Denoting Frenzy refers – which lies at the basis of all the works, is therefore too prominent. The subtle and mannered nature of Support/Surfaces is replaced in Ots’s work by matte filth.

Each of the works entitled Denoting Frenzy initially consists of approximately three hundred identical, glued-together, A4 photocopies of a martini glass. The sheets are glued pyramidally toward the centre. It is an accumulation that gives an explicit physicality and gravity to the papers.

The stacking of the martini glasses is reminiscent of the image of a champagne fountain. The pyramid structure of the champagne fountain is however pressed flat and transformed into another type of space and dimension. The martini glasses have become monumental echo chambers, kind of like claustrophobic waiting rooms.
For the exhibition at Etablissement d’en face these paper works are hung from large pieces of vinyl flooring, which are cut and glued back together, functioning as grotesque passe-partouts. The black-painted and matte-sanded vinyl surfaces, which in turn are hung over a metal frame, resemble huge pieces of black meat, raw and sagging under their own weight. 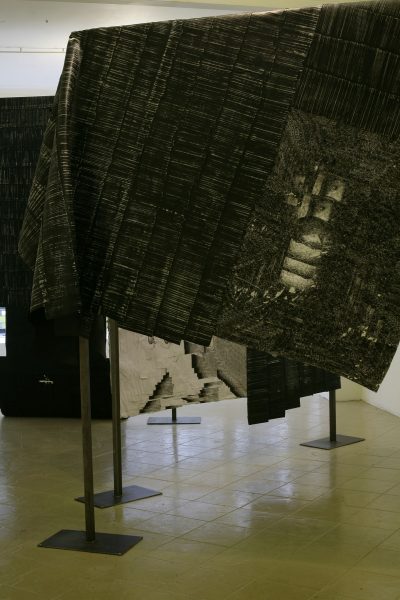 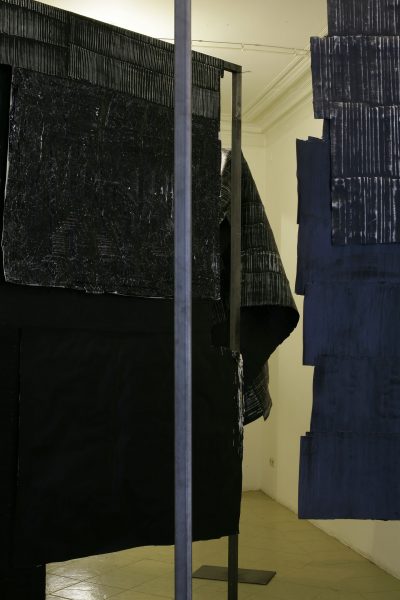 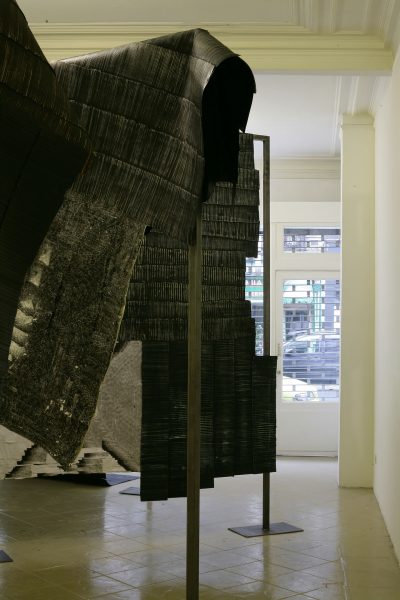 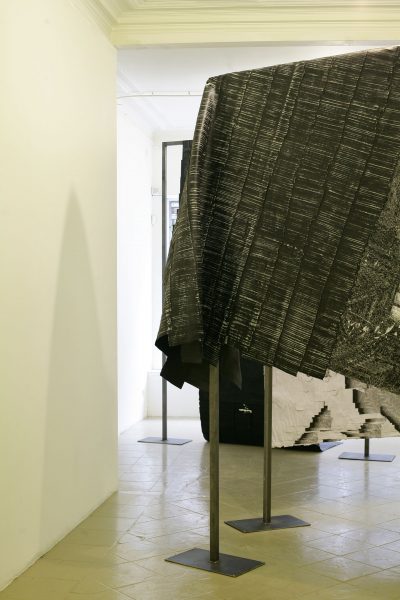 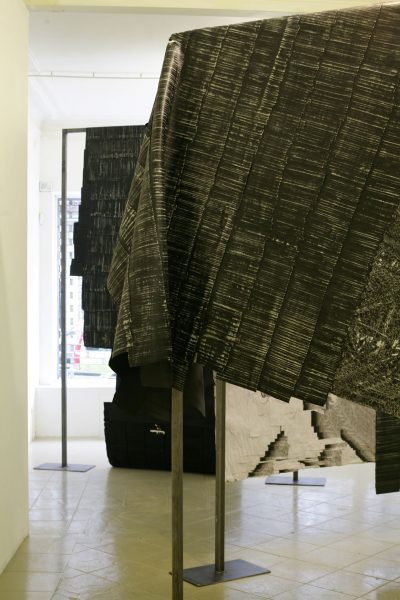 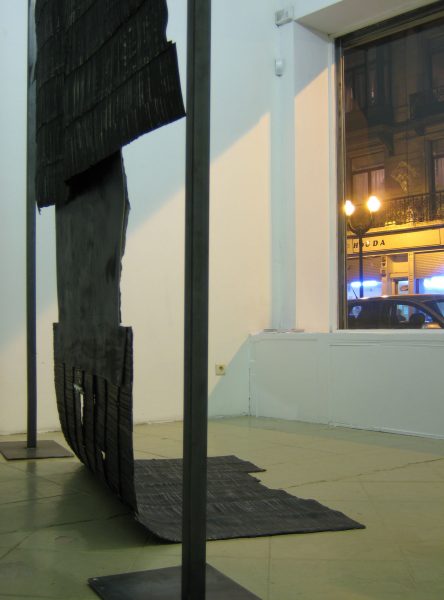 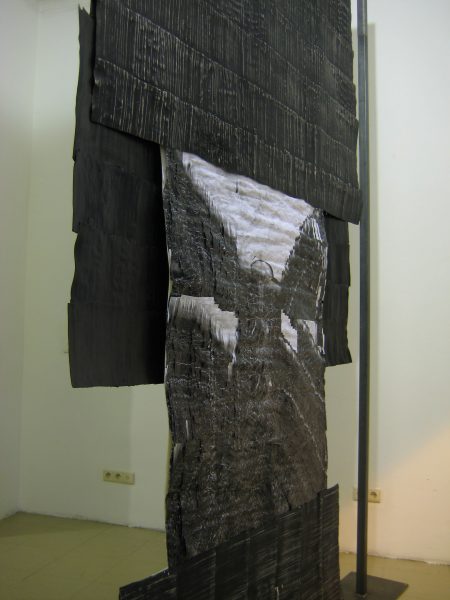 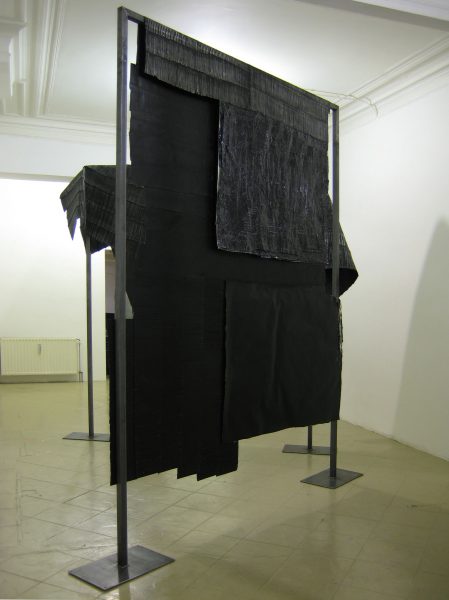 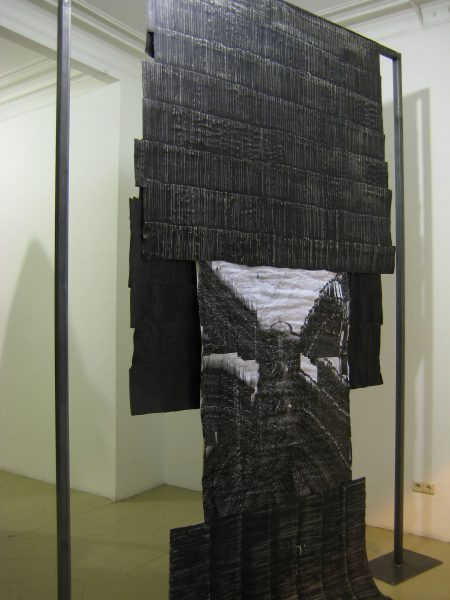 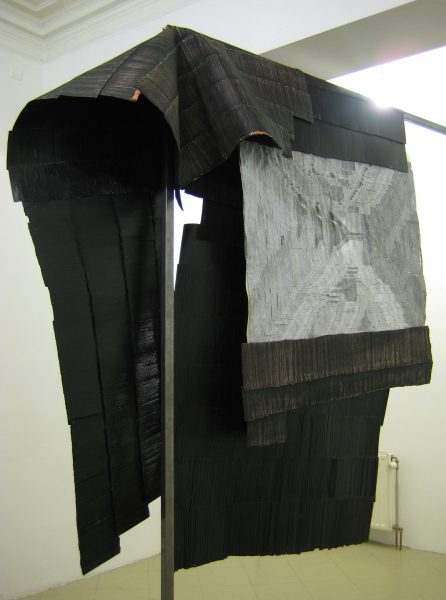 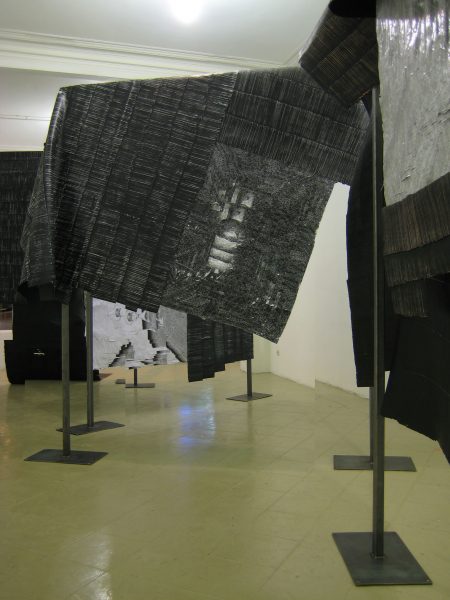