“Etablissements d’en face” is bringing together two series of photographs taken on the spot in 1974:

The first series was taken on February 4, 1974, the day after the ending of the ANDRE, BROODTHAERS, BUREN, BURGIN, GILBERT & GEORGE, KAWARA, LONG, RICHTER exhibition for which Broodthaers had made his first Jardin d’Hiver [Winter Garden].

The second series was taken on 26 or 27 September, 1974, some seven months later, during the installation of the Broodthaers retrospective exhibition CATALOGUE-CATALOGUS which included the Jardin d’Hiver II.

Our thanks to Olivier Foulon and Etienne Wynants for “Etablissements d’en face”, to Saskia Gevaert and Jean-Pierre Beauduin for the printing of the photographs, and to Maria Gilissen and Marie-Puck Broodthaers for their support.

The sequences of photographs on the left are arranged on two large pieces of cardboard. The images follow the same sequence as in the negatives: there has been no choice, no elimination whatsoever. The camel is followed from the lorry to the hall of the Palais. This took place on Monday February 4, 1974, the day after the closing of the collective exhibition which had been open to the public since January 9. Each of the artists invited had one room at his disposal and had been invited to present a new work. The catalogue had been conceived on the same basis: each participant was free to produced an eight-page gathering.

In a letter to Marcel Broodthaers dated November 17 I confirmed our telephone conversation concerning his wishes. The most intriguing aspect of this relates to his request for two cameras and two video monitors. A monitor with a pre-established, fixed programme (which in the end was never set up), and a camera with a monitor reproducing the to-ings and fro-ings in the room. I wish to insist on this aspect in particular since Marcel Broodthaers’s ‘pet hate’ from as early as his ‘open letters’ from 1968, was advertising, the media, and more particularly television. On the tables I have brought together a number of quite revealing documents on this question: from his 19 September, 1968 ‘open letter’ to his last book Lire la Lorelei [Reading the Lorelei], through extracts from a conversation round Toroni published in the November 1970 MTL Magazine and the announcement in the Studio Arenberg’s periodical of the projection of Un Film de Charles Baudelaire [A Film by Charles Baudelaire], in February 1974.

However, let’s come to the camel. As far as I can recollect it wasn’t part of his original preoccupations: I don’t mention it in my November 17 letter, and I don’t remember his telling me about it when I visited him in London in December 1973.

If the camel episode took place after the exhibition closed, the question arises as to whether Broodthaers had the intention from the outset of using the ‘setting’ of the Jardin d’Hiver to make a film… How can we know?

I would venture the hypothesis that the idea came to him in January 1974, during the actual exhibition. In fact we contacted the Antwerp zoo and soon obtained an appointment with the curator in charge of the mammals department. The important thing to remember is that  M.B. wanted a zebra. The curator gave a categorical refusal, given the fact that zebras cannot be tamed. The negotiations concluded on the choice of a camel whose entry into the hall of the Palais des Beaux-Arts would be filmed. During that entry two cameramen had been hired : Paul De Fru with his 16mm camera, who was filming in the room in which the Jardin d’Hiver had been set, and another cameraman in the hall, filming the camel, whose image was being transmitted to the screen of the monitor in the Jardin d’Hiver, one floor above.

These are I think the only photographs, other than those of Maria Gilissen, of the filming of the 16mm colour film Un Jardin d’Hiver, which was to be shown six months later during the CATALOGUE-CATALOGUS  exhibition in the Jardin d‘Hiver II (see plan).

The sequence of photographs on the right is much shorter, as it only includes 24 images. They all turn round the production of a sand carpet with as its motif the signature MB as well as some foreign currencies. You can also see on it all the people around the artist, in a fine atmosphere of relaxation and good-heartedness!

This work was swept away by Broodthaers the day after it had been produced and he eventually created a sand carpet lined with an alphabet stencilled on to it, with two letters magically escaping their inexorable succession. In the centre of this sand ‘desert’, he set a potted palm tree which he connected with its reflection printed on a bath towel hooked to a picture-rail, on to which he stencilled the letters abc at the upper edge and along the bole of the palm tree.

This is the outcome of a number of abandoned ideas. The initial project indeed planned to place from one end of the rooms to the other, or at least in one of them, at regular intervals, low display cases made of wood, as used by the Palais to exhibit small precious objects, books or rare documents. His intention was to plot, from the oak parquet floor all along the picture rail, the letters of the alphabet in various colours, which going along the display cases and regaining the oak flooring below would have followed the entire contour of the room, forming an alphabet primer. With a view to carrying out this idea a craftsman was found along the road from Asse to Alost who still practised the age-old decorative tradition of sand carpets linked to certain religious or family festivals, just as in other parts of Belgium people strove hard to create flower carpets. In spite of the dearth of imagination in the productions that M.B. and I had before our eyes (sand copies from Brueghel reproductions fitted to large wood panels!) we nevertheless hired the craftsman, if only on account of his undeniable virtuosity. The initial idea having been discarded for whatever reason, M.B. convinced the craftsman to produce a large sand carpet on which his signature and foreign currencies would be combined as perfectly as possible. As he was not satisfied yet, M.B. swept it away, and the craftsman’s work was limited at long last to stencilling letters in the last room, as mentioned above.

I will not describe here the succession of rooms in the CATALOGUE-CATALOGUS exhibition. By using a number of documents, letters and photographs in my possession and presented on the tables along the wall I have tried to reconstruct it as faithfully as possible.

For some of the works exhibited or rather piled up in the tall display cases I have added to my photographs some documents, some of them earlier than the exhibition, some later, dealing with similar works. For instance, for the object made out of plaster balls, to the left of the photograph of Marcel Broodthaers sitting on the ledge of the bank counter (1964), I placed next to the photograph the catalogue of the Neue Nationalgalerie in Berlin, open on two pages presenting different transmutations of the same object. I have also insisted on the notion of the alphabet, based on letters shaped by Marcel Broodthaers and hanging from a hair-dryer. Those two photographs taken by Maria Gilissen, annotated on the back by the artist with letters from the alphabet, were published in 1970 by the Antwerp concrete poetry magazine LABRIS. And finally, I couldn’t help showing a photograph of the painted and handwritten canvas Un Coup de Dés, on which the beginning of the poem in capital letters is preceded by the entire alphabet. 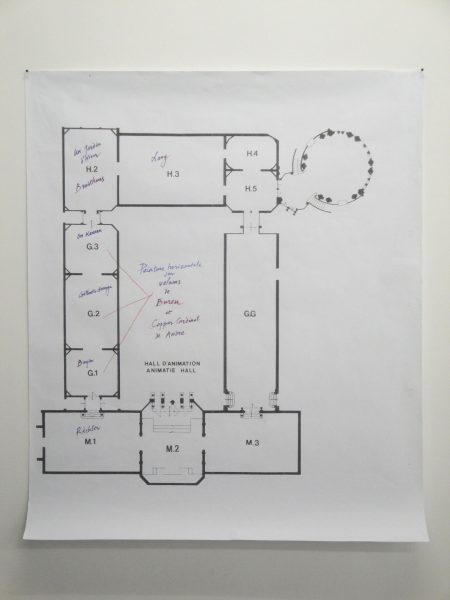 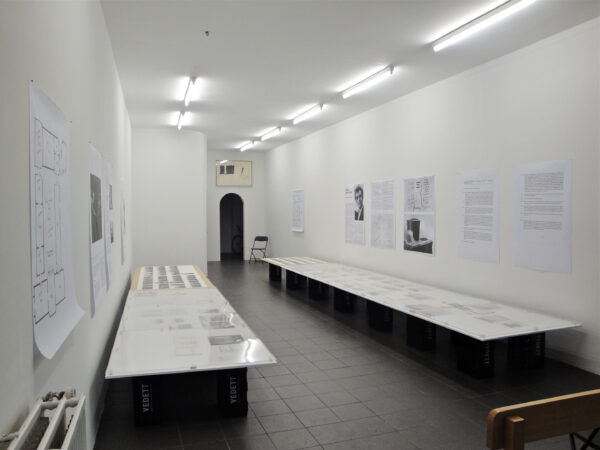 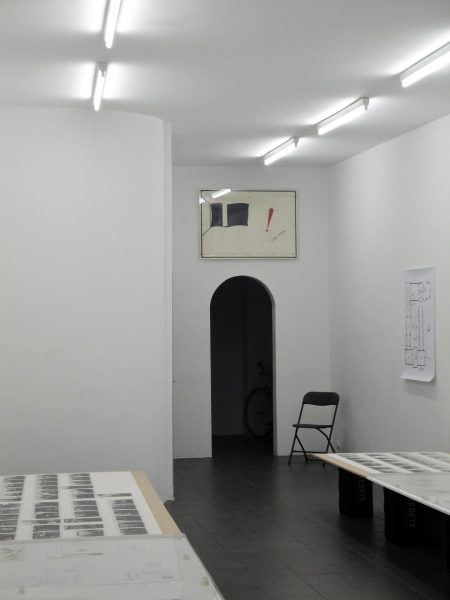 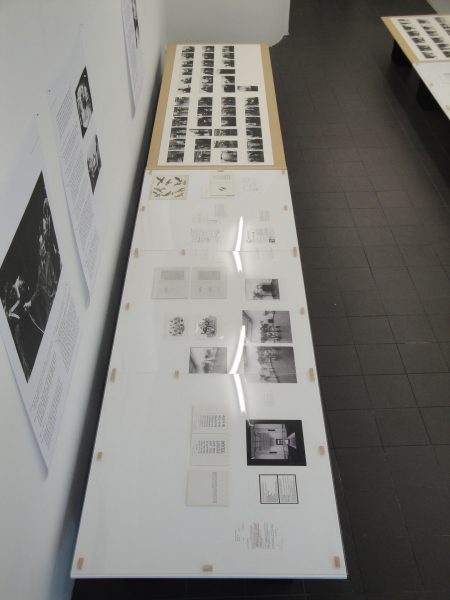 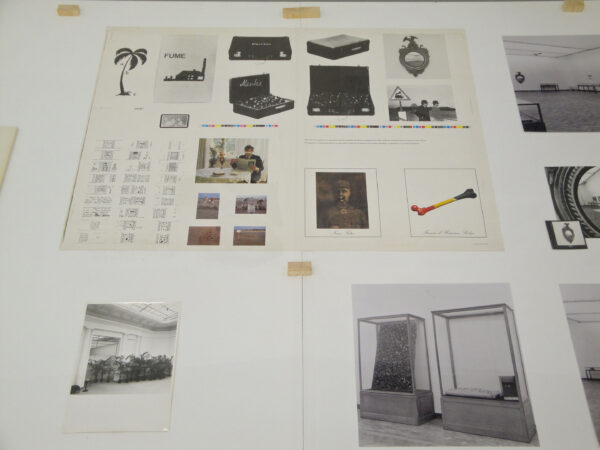 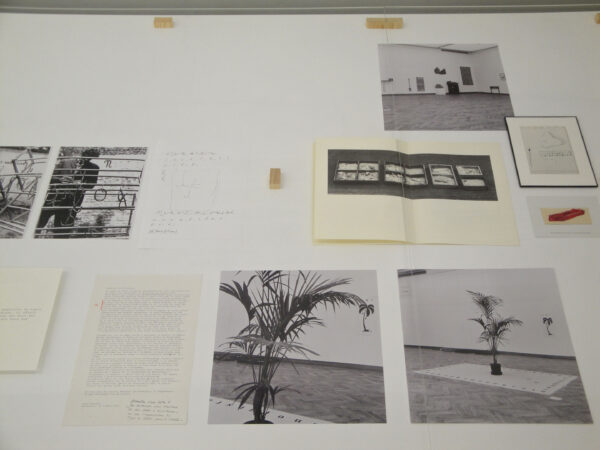 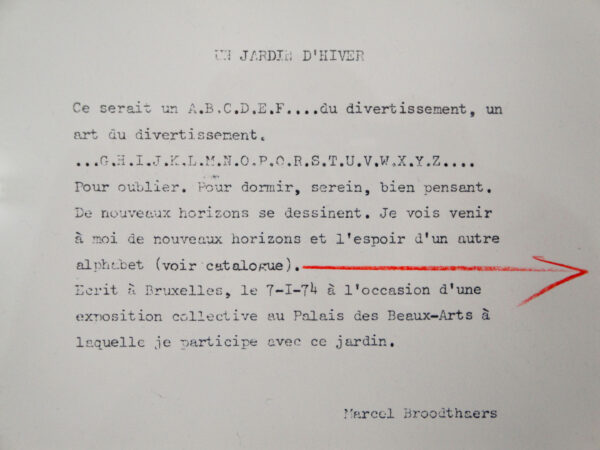 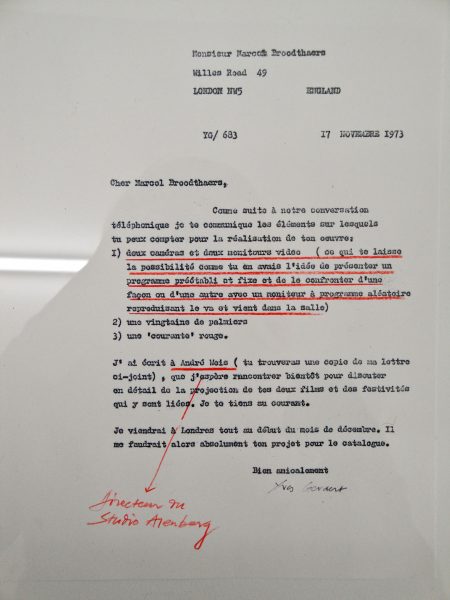 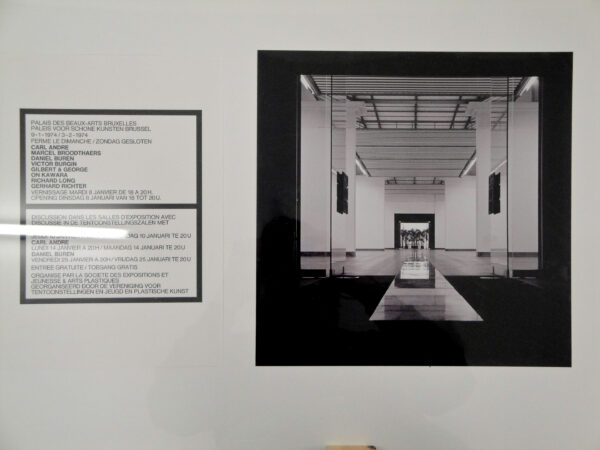 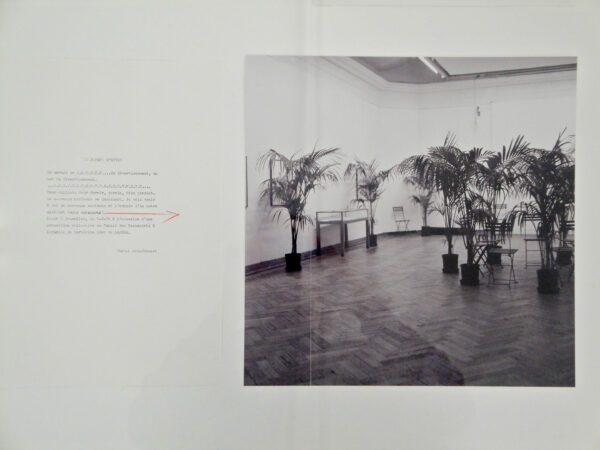 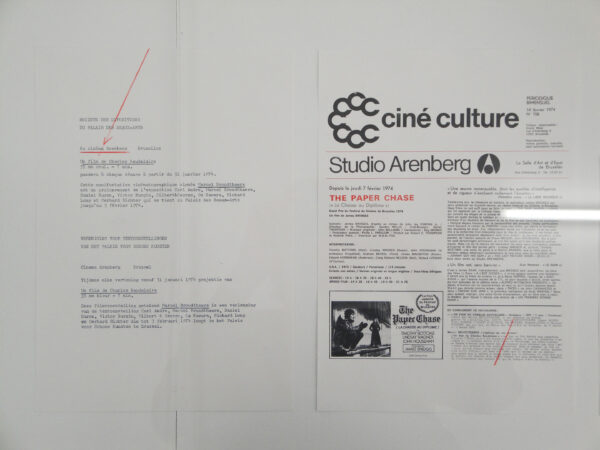 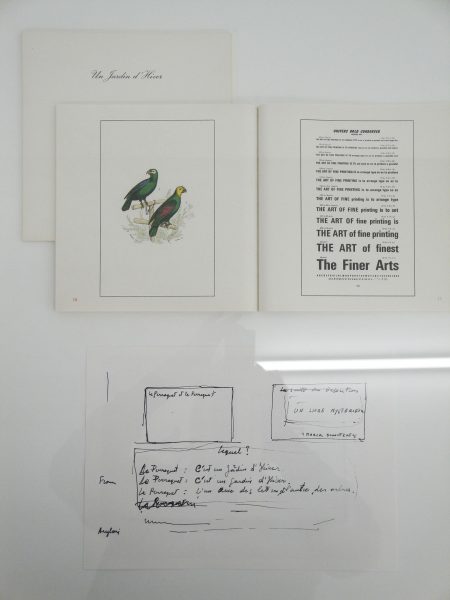 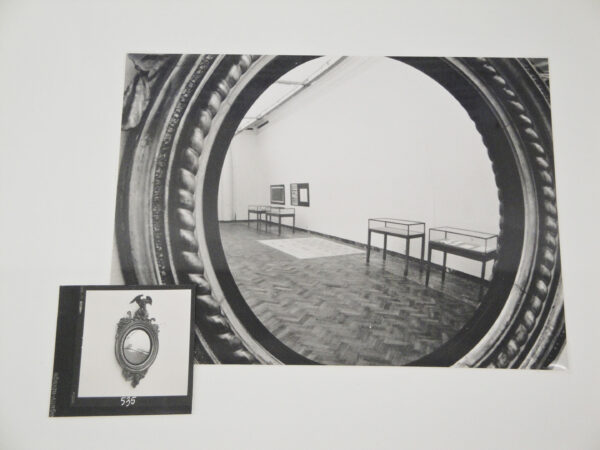 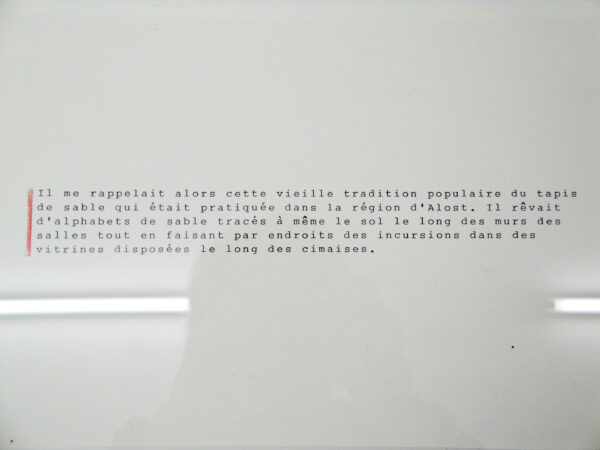 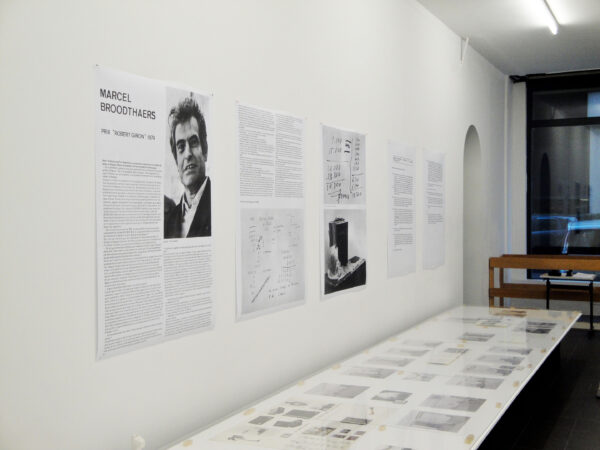 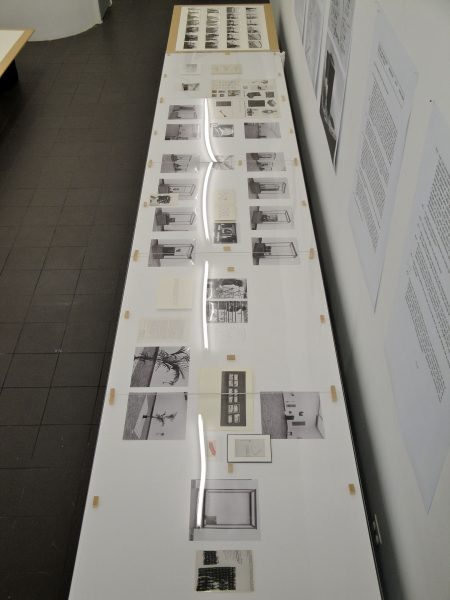 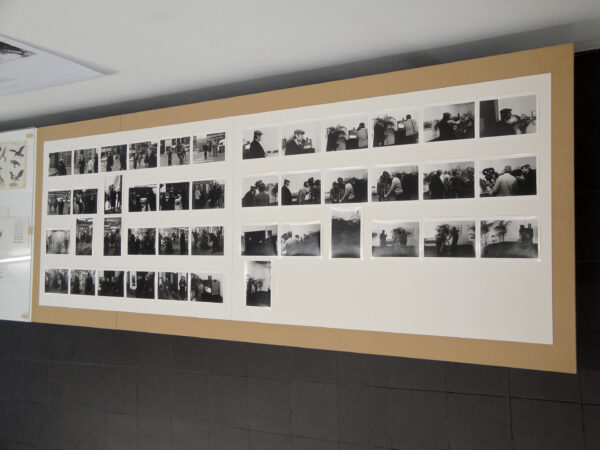 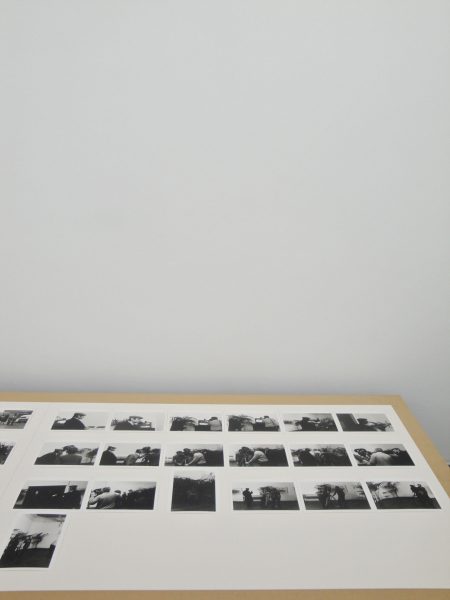 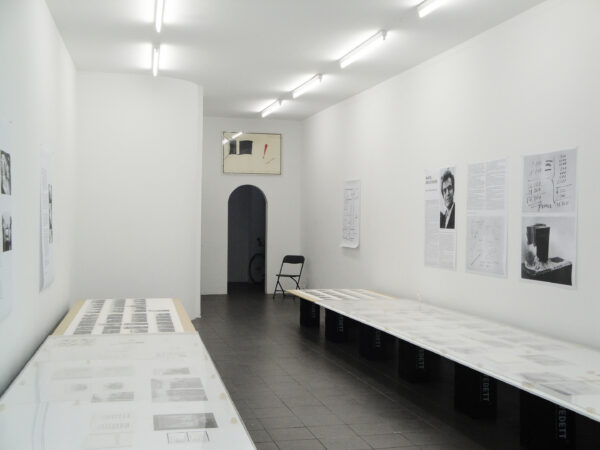 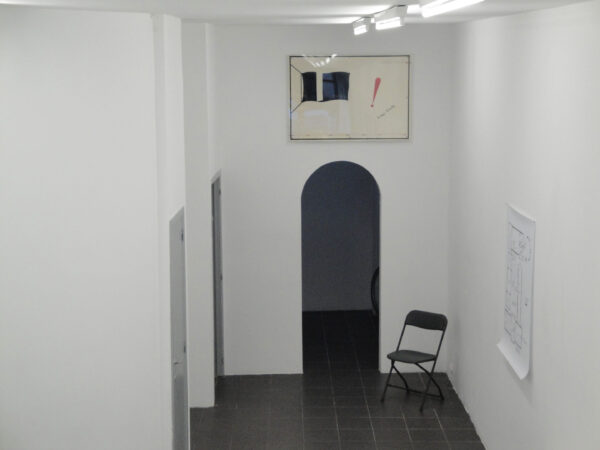 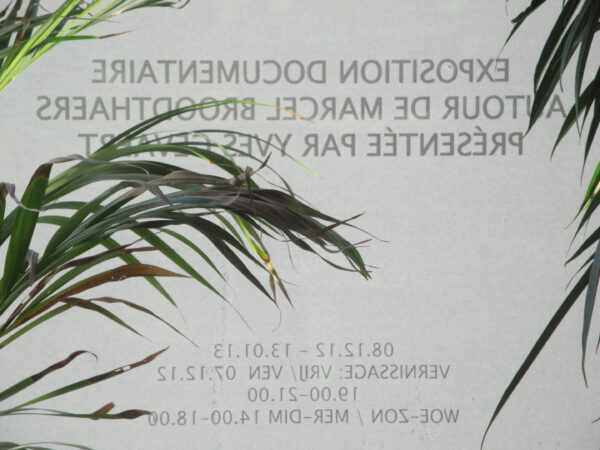 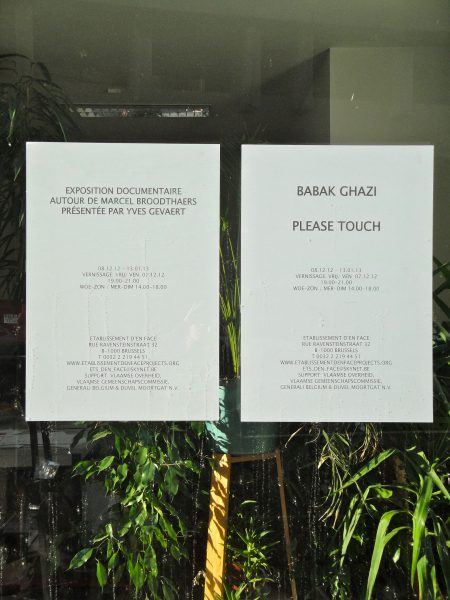